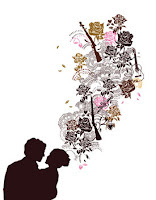 Yesterday I went to see a play in the south part of London. We got to Southwark Playhouse, a small theatre built inside a tunnel, at 19:30 and watched an adaptation of Like water for chocolate. It was almost in spanish, so we didn't practice english too much, but we had a good time.

The tunnel where the theatre was built is part of the structure which holds up the subways tracks. Sometimes during the play you could hear the subway passing through above us.

At the end of the play there was a talk with the actors where you could ask them any question you wanted. It was interesting to see how the people behind the roles really were.


By the way something has happened a moment ago near our house. A woman could be heard screaming in the street and then the police came. I still don't know what's been going on. I'll keep you informed.
Publicado por Yvon en 2:06 2 comentarios: 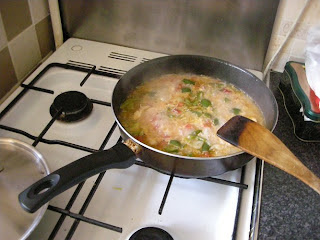 My first meal in London made by myself. After coming some friends of mine gave a cooking book as a present and this is the result. I´m going to try to cook at home because everything is very expensive here, and as I'm not still working I have to save some money. It was a little bit tasteless, I have to remember to add more salt the next time.

In the afternoon we went to a pub near Picadilly to see a football match, The duke of Wellington was the name I think. I don't like football at all but we had a good time talking there. I need to practice english as much as I can.

Then we went to Chinatown and had dinner in one of its restaurants, so I wasted there all the money I had saved in the morning.
Publicado por Yvon en 2:18 4 comentarios:

Walking through the Soho

Today I've met my friend Crihti at Picadilly Circus. We went to eat some wraps in a place she knew and she's been my tourist guide this afternoon showing me some cool places to eat and go shopping.
Publicado por Yvon en 0:22 4 comentarios:

On Thursday I went to have walk through the streets with no destiny in mind. I was looking for a traditional place to eat but I couldn't decide were to stop. There were a lot of indian take aways and some english pubs who seemed to be a little bit expensive, so, after walking for a long time, and been very hungry I finally ended having lunch in a Kentucky fried chicken. Not very traditional, I now. Better luck next time.
The rest of the day I went on walking along the Thames, crossing its bridges a few times and visiting the Tower of London and the Tate modern gallery, but only from the outside.

I spent all the Friday organizing my room and writting my CV. I met Duca in Camdem town to have dinner. Then we went to a pub and we found that there was a concert in it. The bands weren't too good but it was enjoyable for a friday night.

Saturday was the IKEA day. Going, buying, carrying back in the tube. All of an adventure. 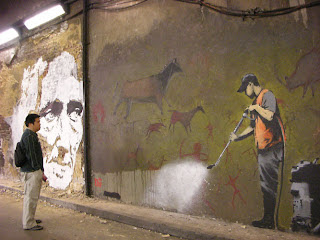 And yesterday we went to the Waterloo station to see the tunnel were Banksy and other graffiti artists had done their works. 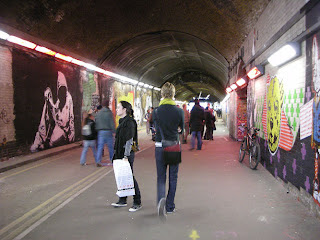 After leaving my last job in Bilbao I've started a new stage in my live coming to London. My idea is to continue showing my drawings here but, as I also need to practice my english, I'm gonna to try to write some words every week or so about my life here. 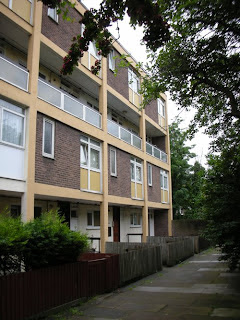 This is were I'm living now with my flatmates Duca and Miriam. Located in the East part of London it's an indian neighbourhood very near the subway station so we don't have problems to move anywhere.

My english is not good enough now but I hope to write better in the future. Let's see how everything goes.
Publicado por Yvon en 2:26 No hay comentarios: